If you're tired of VMA talk...well I'm sorry. I just didn't wanna blog yesterday because I was actually doing something productive for once. Write that shit down.

So...here's my list of thoughts on the VMA's this year.

1. Fuck yes I was watching for N*SYNC. Was there anybody out there besides my wife who wasn't? And I'm not ashamed but there were tears. I told you I'm a crier. My mom even called me out on crying over the phone after we watched it. The 11 year old me was pumped. The 22 year old me was even more pumped. They paved the way for the rest of the so called boy bands. I'm looking at you One Direction. 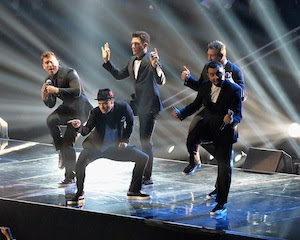 2. Kanye...what can you say about him. I'm not sure I like him as a man but as a rapper he's a genius. The only person that can get away with being called Yeesus. Why was he hiding in the dark the whole time?


3. Katy Perry sang that song Snore...I mean Roar. I'm not a fan. Never have been and don't think I will be. The winner of that fight may have been her, but Russell won the whole divorce. I mean it was just a snoozefest of a finale. I was really disappointed. I thought there would have been explosions or fireworks or something. Nope. Nothing.

4. Bruno Mars was interesting. See, I don't listen to the radio. I don't listen to a lot of music on Songza that isn't country. I'm not a snob, I just don't like change. I like Bruno. I enjoy everything he's done but Grenade. I've never heard a song from him unless it was on the radio. So as far as I was concerned, he didn't sing a lot about gorilla sex. That song was just fucking weird. I like it but I felt awkward listening to it with anybody around. I think my head was tilted to the side the entire time he was performing. But he did a great job. I love listening to him sing.

5. From ramen noodle hair to Hollywood hottie, Justin has done it all. And last night was amazing. They should have just let him perform for Katy too. He's Justin Timberlake. I think he had it right when he said he still runs this bitch. Yes sir, you do. And I had a great tweet to it. Ok, the tweet wasn't great but my hashtag was. And I would love it if it somehow found it's way to Sami's twitter recap. *hint hint* Kidding. Not really.

6.  Why wasn't there a host? That part left me baffled. The whole show was thrown off to me. I mean, we don't even have to use Kevin Hart ever again because he made fun of N*SYNC, but we need somebody to hold it all together.

7. Little girls shouldn't be allowed to vote for anything. Robin Thicke, Bruno Mars, Justin Timberlake, Pink, Rihanna, and Fun were robbed of awards last night. I know that some of them got some but man for the most part it was less than talented "singers" winning. No thanks.

8. Taylor Swift still can't dance. Maybe she should take some lessons from Miley. At least her surprise face was gone though. It only took like 6 years. Maybe we only have a few left until she learns new dance moves. And why was the camera guy always shooting back to her. Nobody cares.

9. Then there was Miley. I didn't hate it. It was raunchy. But it's what she wanted. She got attention. It wasn't positive attention but it was attention. I say get it girl. Do your thing because you rocked it. Do some squats too though. And stop kissing and grinding on married dudes. I don't care if you hump inanimate objects or twerk, just leave married guys alone. He has kids! 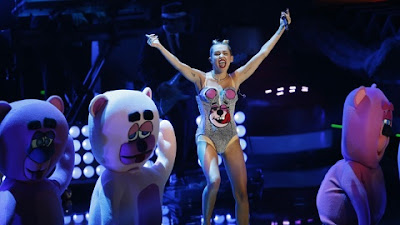 10. Let's all boycott the VMAs next year. I bet they won't compare to this year. And we're too old to watch this shit anyway. Seriously, do you know who any of those newbies were? I didn't.

I think I'm the only blogger who didn't watch the VMAs.

I watched but only after Breaking Bad was over... which means I made it just in time for JT and NSYNC! I died. I literally died and went to dirty pop heaven. I tried watching it again on YouTube but it just wasn't the same. That moment was magic.