Ahhh the good ol' blog. I missed it yesterday. I had intended to link up with Helene and Taylor but I had somewhat of a shitty morning and couldn't get to the computer. All is well now though.

I wore my blog so hard shirt to work yesterday. And I finally told people that I had a blog. Some looked at me funny, others were like whatever about it, but dammit, I'm proud and this space is mine.

I like that I can write whatever I choose whenever I choose. The best kind of writing is when I have nothing to say and the words just flow out of my fingers. I think that they move faster than my brain can process what I'm thinking at times.

It's funny how writing has always been a release for me. I used to write "poetry" when I was younger. I can't believe I wrote some of the shit I did, but I've been told it was good. Now I write for all to read. It's such a scary thought that anybody can read this whenever they want. But I wouldn't change a thing. I mean, I've finally had a person steal my pictures to use as their own. It's a funny story actually.

I was checking my stats and saw that babycenter.com was a referring url. I thought what in the fuck would bring people from babycenter to my blog? I don't talk about babies or my own kid that often. That's odd. So ya know, I had to do some snooping.

This 15 year old girl was trolling a forum I guess and people wanted to see a picture of her with her aunt. So she typed something into google and came up with this image. 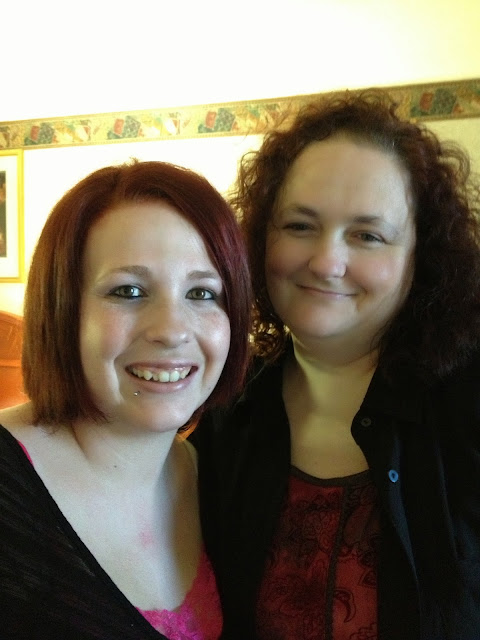 However, that's not my aunt, that's my mom. This was before the Luke Bryan concert in February. I posted a pic with my Aunt too. She grabbed the wrong one. Oops. I tried to message her and tell her that she should be careful with what she chooses to use off the internet. She not so politely told me that I wasn't really that girl and I need to shut the fuck up. lololol.

I know that people can take whatever they want off of my blog, or out of google images and it doesn't really bother me, unless they're pretending to be me a lot more than this girl was. It just made for a good story.

I'm gonna nap now. I watched the season finale of Sons last night and I couldn't sleep afterward. Seriously though...if you watched it, how heartbreaking was that??!!?? I want to discuss it with people but I don't want to ruin it for those who haven't watched. E-mail me with your thoughts!

Labels: blogging
Email ThisBlogThis!Share to TwitterShare to FacebookShare to Pinterest

yeah, i don't think of your blog as a baby center place!! it is weird how people find our blogs :)

I've been waiting for you to blog about this! What a weirdo. We're still behind on Sons of Anarchy but we'll probably get caught up this weekend!

What. A damn. WEIRDO! bahahahaha