Choosing My Own Adventure

So one of my mostest favoritest bloggers in the whole entire blog universe, Stephanie, announced that she was doing a link up, I know I had to join.

The only thing was, that this month's theme is fitness -.- . If you know me, I'm not much of a fitness person. But I knew I needed to start doing something. After all, it's only 13 months until my wedding and I need to start getting in shape. I honestly had no clue what I would do.

Blake bought us an elliptical and I figured that I could actually use it. Because neither of us have touched it except when we were first excited that he bought it. That was about a month ago. S

So in the meantime I've been scratching my brain, trying to figure out what in the hell I'm gonna do. And then I found this on facebook this morning. 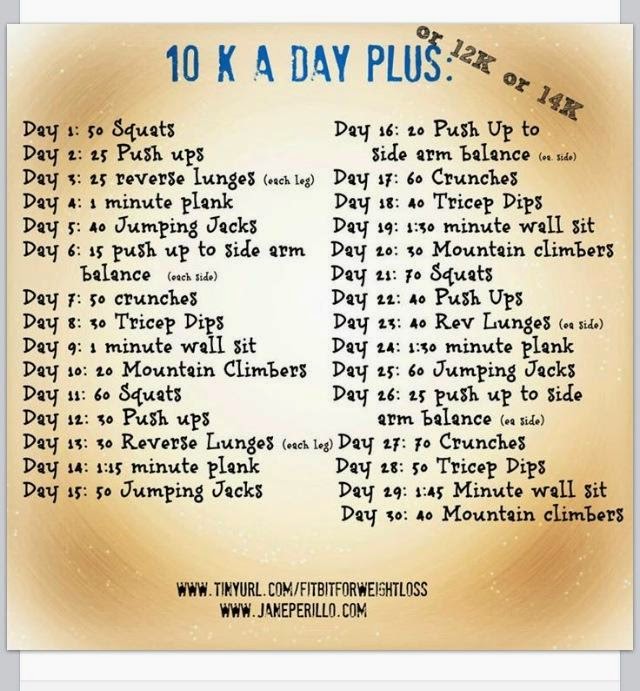 My friend has a fitbit and this is what her fb fitbit group is doing. So I decided that I'm gonna do it. I may not have a fitbit (but I really want one), but I can do these things without one. I'm gonna have to research what in the hell some things are, like a reverse lunge, and a push up to side arm balance, but whatever. I can figure it out!

Labels: choose your own adventure
Email ThisBlogThis!Share to TwitterShare to FacebookShare to Pinterest

no you wont be dead!! just eat right, use the treadmill (or better yet, go outside) and it'll happen :)

you wont be dead! good luck girl, all you have to do is try - a little is better than none, and before you know it, you'll get better!

You can do it. Before you know it the days will get easier and you will be wanting more.

I think this may be good to spark some motivation, but I think you have it in you to push a little more than that ;) You should look into Jillian Michael's. I SWEAR by her videos. You need to get at least 25-30 min of sweating in 4-5 times a week to see results.